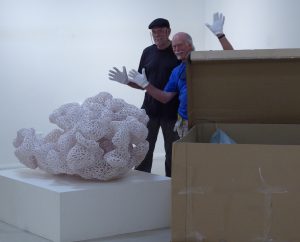 The team of ‘Unpackers and Hangers’ for the Alice Prize have exercised their own judgement in choosing one artwork to be the winner of the Alice Prize Unpackers’ Award 2016.

Congratulations to Lucy Irvine whose sculpture, “Taking” 2014, 75 x 155 x 120 cm has received recognition as the winner of the Alice Prize Unpackers’ Award 2016. It is made from electric fence cord carefully shaped and skilfully joined by the artist with thousands of cable ties. The huge box it was delivered in is also impressive!
Unpacking of artworks that arrived for the 39th Alice Prize 2016 is an exciting experience for the Unpacking team who are themselves artists and volunteers from the Alice Springs Art Foundation, who present the Alice Prize, and sister organization, the Central Australian Art Society. They donned the white gloves to unpack the artworks and assist with installing the exhibition alongside Araluen staff.
Since the Unpackers do not always agree with each other, their secret ballot involves votes and preferences followed by stimulating discussion and decision by consensus amongst the team.

Artist’s Statement excerpt:
I have developed my weaving techniques to create increasingly complex and dynamic forms from industrially produced materials. These ubiquitous materials that function as part of the fabric of our everyday lives, undergo transformation in the incremental stitching and amassing of emergent forms. . .

I propose that weaving intertwines the movement of knowing with space and time. . . My woven sculptural forms are not predesigned; they emerge as the realisation of complex spatial interrelations.